Behind all that writing, I have a garden–as you may have heard around these blog parts. Since coming back from Taos Toolbox, I’ve been furiously trying to play “catch up” with the weeds and plants that went haywire for 2 weeks in wet, rainy north central Florida’s July…and I’m finally feeling some modicum of success. Let me show you what (besides words) I’ve been up to:

Yes, the pumpkin vines have gone crazy! I planted 6 vines grown from seed from a heat- and drought-tolerant Seminole pumpkin bought last year for this reason. I harvested the first 3 pumpkins over a couple days, and let Dasher pose with them for scale. Yes, the pumpkins weigh more than the dog does. Yesterday, I got fed up with the pumpkin vines sprawling on the driveway (despite my pruning them back and edging them aside with my feet every 2 days or so, they kept trying to cover the entire driveway in their lovely, silver-speckled greenery). And so I decided these were “ripe enough.” In comes another 30 lbs of fruit!

Today is pumpkin processing day. I’ve split, de-seeded, and baked the first 4 pumpkins, and bagged the first 2.5 pumpkins (the last batch out of the oven is cooling until I can touch them). Already, seven 2-cup bags are resting in the freezer, each destined for pumpkin pie (2 pies per baggie), pumpkin bread, pumpkin soup, cookies, muffins, bisque, ravioli, etc. And have I mentioned that at least 5 more pumpkins are growing in my garden? Oh, and at least another 4 or 5 across the fence in the neighbor’s yard…which means I can’t   give them any of this homegrown treat. However, the flesh is soooo sweet and delicious; just scooped out of the shell without anything added, it tastes like it’s been sugared for pie. 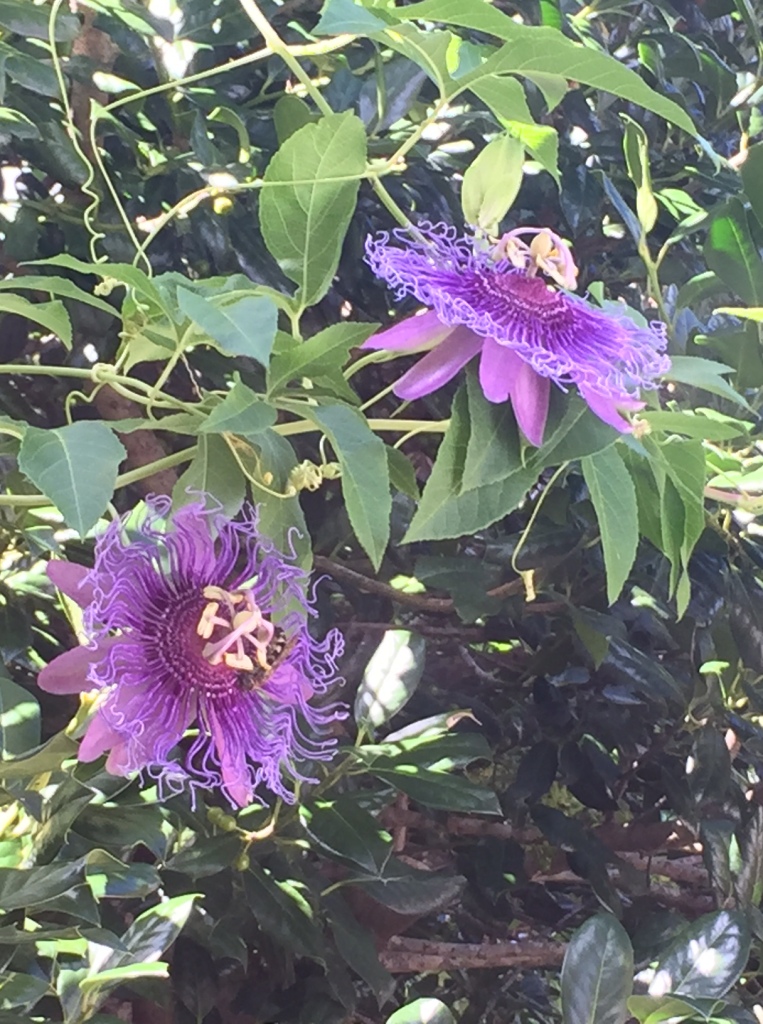 Yesterday, before the pumpkin picking began, I noticed these flowers outside my dining room window. A wild passion flower threaded itself through the holly tree and bloomed beautifully, as if posing for the photo. I shoved my nose into it (later, when I went outside; not through the window!), and it smelled like the heady, pollen-heavy scent of dandelion crossed with the lighter, sweeter floral of white clover. Not bad for a free “volunteer” in the garden. It’s also a host for the larva of the zebra longwing, Florida’s state butterfly, and there are tons of them about!

Finally, here’s a picture of something that really just makes me smile. It’s an American Beautyberry bush growing like gangbusters in my garden. It’s native to this area, and you see them growing wild in undeveloped areas, but oddly enough, rarely in people’s gardens–although up north you can pay a premium for them thanks to the recent interest in native plants. Last fall, husband and I “liberated” it from a strip of land destined for development, and which now is being steamrolled into submission to make another through street. The beautyberry limped and gimped through winter, sulking at being moved like that without even being asked, but now it’s decided it pretty much likes domestication and has put on the full show of berries turning that awesome shade of purple.

That’s about it. The remaining baked pumpkin is cool enough to handle, so off I go to process more. Guess what we’ll be having if you come to visit?